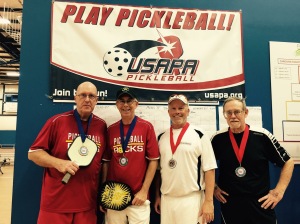 Gary Ball and his partner, Rodney Grubbs (from Brookville, IN), took the gold medals in the Men’s Doubles Age Groups 60+ Division this past March. They did not lose any of their five matches, as they defeated the silver medal team of Rocky Clark and Jerry Clark in three games (2-11, 11-2, 11-7) in the winners’ bracket and then later in two games in the finals match (11-4, 11-3). Gary and Rodney also defeated the bronze medal team of Peter Guss & Steven Meredith in the winners bracket by a score of 11-8, 11-4. Congratulations Gary and Rodney!!!

Gary also paired up with Susan Gapen in the Mixed Doubles Age Groups 55+ Division to take the bronze medals. After winning their first match in the winners’ bracket, they lost and fell into the consolation bracket. They proceeded to win four matches before eventually losing their second match to the silver medal team of Margaret Wilburn & Rick Hobson in two games (11-6, 11-5). Congratulations again Gary and also to your partner Susan!!! 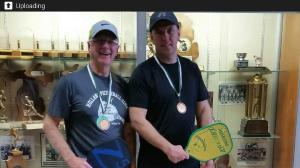 If you are a part of the Toledo area players and are in a tournament anywhere, please let us know so we can post your results. If you have a picture, please send that as well!